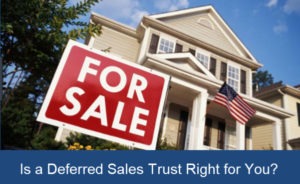 The Deferred Sales Trust, or DST, provides a unique exit strategy for an appreciated business or piece of real property.

A component of the DST is the use of an installment sale strategy to defer and manage the tax obligations that come with the sale of an appreciated asset.

Some of the negative features of the traditional way an installment sale is used puts a great deal of control in the hands of the buyer, thereby transferring most of the risks to the seller. Let me explain. A seller who considers using an installment sale is usually interested in creating an income stream for themselves and deferring or spreading out the tax obligations over the life of the income stream.

Like most business or property sales there is tough negotiating to be done. On price, on terms, the interest rate to be paid on the note, the term of the note, whether or not to amortize the principal, and if so, over the amortization schedule itself. Both the seller and the buyer have different goals and agendas, so neither party typically gets exactly what it wants.

What if the buyer also had allowed the property or business to deteriorate? More money and time the seller has to invest to get the property or business in salable shape again. Also, how about the risk of the buyer wanting to renegotiate the loan? Perhaps he wants a lower interest rate or to accelerate or extend the term of the note. You can say no, but what if the buyer decides to refinance the loan with another lender? Your note will get paid off in full and all the sellers taxes will be due at once. This could send the seller into a higher tax bracket and trigger additional taxes such as the 3.8% Obamacare tax.

Earlier I spoke to a client that was looking to explore a way to exit from his rental home because he retired and moved to a different city 7 hours away and didn’t want the burden of dealing with tenant issues, repairs, etc.  He had about $60,000 in capital gain and about $30,000 in depreciation he had taken on the property.

We prepared an illustration that showed that the DST would have eliminated the risks discussed above and would have returned to him about $6,500 more over a 10 year period (He would still have to fund the initial costs of creating the DST when the property was ultimately sold).  There was an additional catch.  He was contemplating selling this property to his daughter who lived in that town and was interested in an investment property of her own.  Suddenly the dynamics change. While in theory, the daughter could still hold the cards while the seller/father assumed the risks. They are a family, and it was not at all likely the daughter would apply leverage tactics or pull a surprise refinance on her father.  In this case he might have only been marginally ahead after 10 years by using the DST. Also, the seller retained risks in selling to his daughter under a traditional installment sale would appear to be minimal. After fully discussing the risks, return and costs of both options, we all concluded that he should not use the DST strategy and instead use the traditional installment sale.

Last month I spoke to a client who had owned a rental home jointly with a friend for about 15 years. They were both in their early 70’s, in good health but tired of the costs and physical demands of maintenance and repairs as well as tenant issues. They considered what it might be like if one of them died and had to become forced partners with their friend’s heirs. They also wondered if they could achieve the same or greater income selling the property and reinvesting the proceeds, and not have the burdens of managing the property. The income on the property was pretty good, at about $6,000 per month. However the average expenses and repairs had been averaging about $3,000 per month. Their income was very inconsistent, high in some months and actually negative in others.

After completing the analysis for the DST, we found that they would actually be able to enjoy about a 10% better income after taxes (which would be strategically managed for them), and their monthly income would be consistent and reliable. Better still, they would be able to pass to their families a consistent income stream for some time after they themselves passed away. The conclusion was clear. They wanted an exit strategy and the DST made perfect sense.

Share this ArticleLike this article? Email it to a friend!
Email sent!